This column lays down observations on assembly terms and churns among Chief Ministers for state legislatures across India, and the data collection process that the analysis entailed. The dataset that this column is based on—CM & Governors Profiles—provides detailed information on the tenures of Chief Ministers for twenty Indian states, broken down chronologically according to each successive state assembly, beginning in 1962. These states are Andhra Pradesh, Assam, Arunachal Pradesh, Goa, Gujarat, Haryana, Jammu & Kashmir, Karnataka, Kerala, Madhya Pradesh, Meghalaya, Mizoram, Nagaland, Odisha, Rajasthan, Sikkim, Tamil Nadu, Tripura, Uttar Pradesh and, Uttarakhand.  The data will be publicly available on TCPD’s webpage soon.

Members of Legislative Assemblies (MLA), are directly elected to state assemblies on a first-past-the-post (FTPT) basis. Every general state election result marks the beginning of a new legislative assembly for that state. For instance, the Kerala state elections held in April this year marked the constitution of the 15th legislative assembly for the state. The term of each assembly lasts five years, following which fresh elections are held for the next assembly. A new assembly may or may not see a change in the CM’s post, depending on the share of seats won by various parties and the preferences of party members over their favoured candidates for the CM’s chair. At the same time, several different persons might serve as CMs within the span of one assembly, given the mutations in majority support demonstrated by different coalitions, CM and MLA resignations, death of sitting CMs and/or their election to national assemblies, among other reasons.

The dataset shows that, for instance, the state of Assam witnessed four different leaders occupy the CM’s post during the 6th state legislative assembly that lasted from 3rd March 1978 to 19th March 1982. They were Golap Borbora, Jogendra Nath Hazarika, Anowara Taimur, Kesab Chandra Gogoi. By contrast, one leader, Tarun Gogoi, alone served as a CM consecutively across the 11th (2001-2006), 12th (2006-2011) and 13th (2011-2016) state assemblies. Of the twenty states that data was collected on, three ran bicameral legislatures, with an indirectly elected Legislative Council governing alongside the directly elected Legislative Assembly. These were Andhra Pradesh, Karnataka and Uttar Pradesh. The total number of states with bicameral legislatures stands at six and includes Telangana, Maharashtra and Bihar in addition to the aforementioned. The main objective of this exercise was to introduce a measure of consistency across all Chief Ministerial tenures in the data set by disaggregating them at the state assembly level. In other words, denoting the assembly that each Chief Minister served within, and breaking down CM tenures that straddled more than one assembly consecutively and have been thus clubbed together, according to assembly terms.

As a first step, the start and end dates—the dates for the constitution and dissolution— for the state assemblies were outlined. In the case of some states, such data had been meticulously recorded and made available on official government websites. These included Kerala, Rajasthan, Madhya Pradesh and Odisha, among others. On the other hand, the lack of such structured documentation in the instance of certain other states as Goa, Jammu & Kashmir, Tripura, Sikkim and Uttarakhand  prompted a search for assembly term dates in various directions. Governors’ press releases announcing the dissolution of state assemblies and extraordinary gazettes published by the printing and stationery departments of state governments proved to be useful data sources. Archived versions of government websites with the relevant term dates also lent themselves meaningfully to the exercise for the purposes of data-gathering. Other researchers also stand to benefit enormously from drawing on archived web pages made available by Wayback Machine for data collection.

The delineation of assembly terms as described in the preceding section yielded interesting observations. One among these was the trajectory of states that attained full statehood after being carved out from previously-existing states. The assembly immediately constituted in the wake of a new state formed as such was composed of nominated members who governed for a period of one to two years, until the first state election to the legislative assembly was held. For the set of states in this exercise, this has been the case for Uttarakhand, Meghalaya, Haryana and Gujarat. Sikkim, an erstwhile kingdom and though not carved out of a bigger state, also at first had an unelected assembly at the time of joining India in 1970 and later held the first election to the state legislative assembly in 1972. As seen in the dataset, the Chief Ministers for the interim periods in such states were also nominated, and have been denoted caretaker CMs. In cases of Union Territories that were upgraded to full statehood, elections were already being held to UT legislatures such as in the case of Goa, Mizoram, Nagaland, Tripura and Arunachal Pradesh. 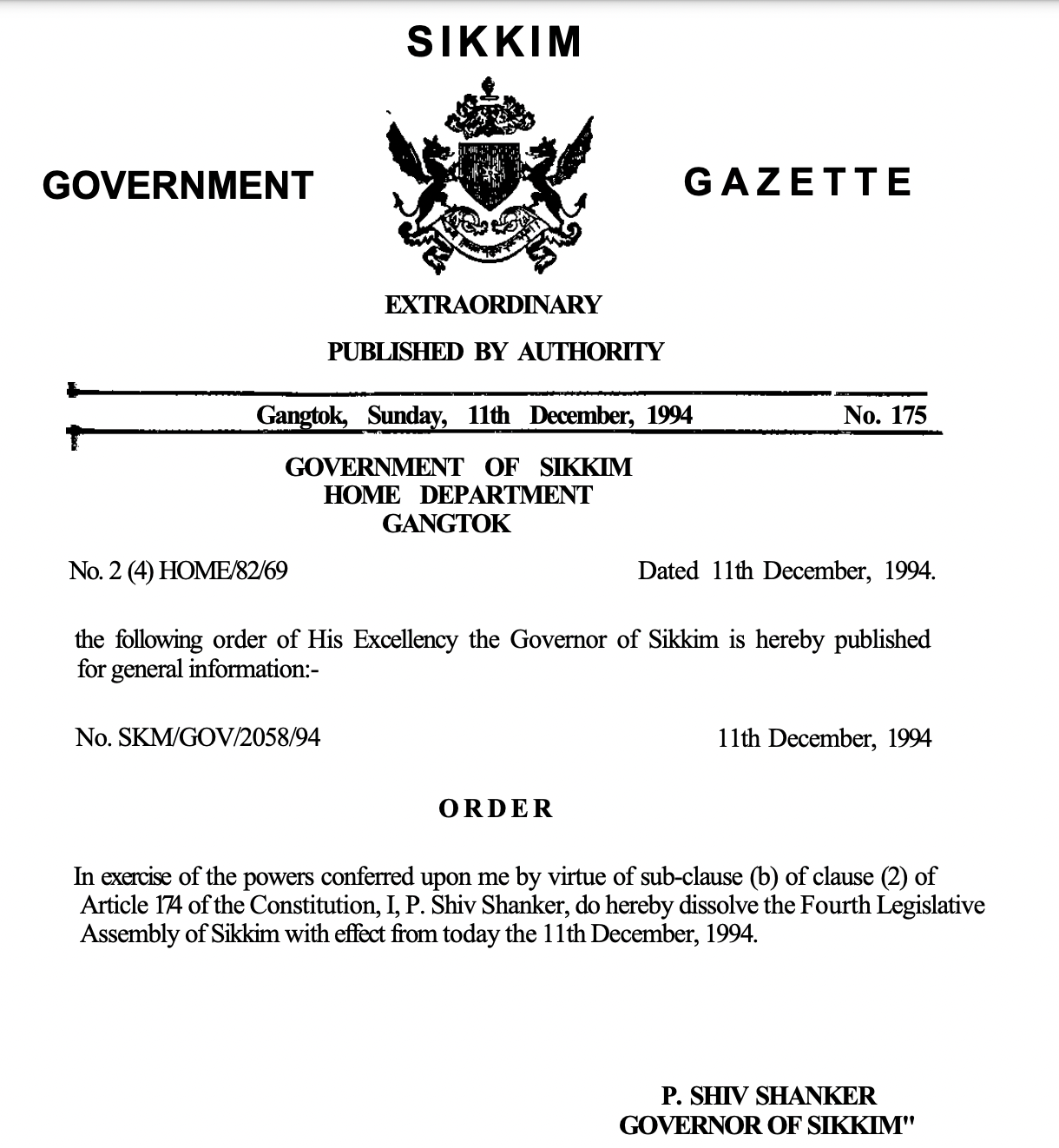 Figure 2: Assembly dissolution order issued in 1994 by the then Governor of Sikkim sourced from the state gazette

Regardless of the specifics of the denotation of the assembly start date, it is important to distinguish between the constitution of an assembly, and the formation of a government. While the former is simply a function of the winning candidates of an election who then make up the incoming assembly, the latter involves alliances and halfway mark arithmetic around majority support by different parties. The feature of a government falling or forming appears to be relatively more volatile and can happen multiple times within the same assembly, depending on parties’ ability to cobble together coalitions and/or break them. In the event of the fall of a government and the formation of a new one, the interim period might be characterised by the President’s rule, even while the assembly carries on. Therefore, while a sitting CM and President’s rule represent mutually exclusive events, the same is not true with relation to the continuance of an assembly term and President’s rule. While a loss of majority might bring the term of a government to an end, unless the governor dissolves the assembly citing Article 356, the term of the assembly does not end. In a few instances, however, governors have dissolved the assembly and called for fresh elections after numerous parties failed to demonstrate majority support, as in Karnataka in the year 1989, when the S.R. The Bommai-led government failed to secure majority support in the house, leading the Governor to dissolve the house. Notably, the aftermath of this particular instance of dissolution also led to a landmark Supreme Court judgment that sought to address the misuse of Article 356 (Harish & Raghavan 1995).

Assembly terms, when employed as a basis for disaggregating Chief Ministerial tenures, reveal interesting patterns of CM churn across states. Multiple instances of successive CM post alternation in a state between the two most popular and often, populist party supremos from rival parties become apparent. This is particularly true in the case of regional leaders. For instance, M. Karunanidhi and S. Jayalalitha, both populist leaders from rival parties and contemporaries of each other, alternated the CM’s chair between themselves for each successive assembly  between 1989 and 2001, and then again between 2002 and 2016, save for a few months between September 2014 and May 2015. Similarly, in the case of Uttar Pradesh, Mayawati and Mulayam Singh Yadav, also considered contemporaries of one another and supremos of the two main parties in the state, alternated the CM’s chair among themselves thrice in a short span of four years, between 1993 and 1997, and again between 2002 and 2012. While the history of Chief Ministerial tenures in both states has been punctuated by other names such as T Panneerselvam in Tamil Nadu and Kalyan Singh in Uttar Pradesh, the feature of orderly, repeated CM post alternation in every successive assembly between different leaders occurs only among the two most popular regional leaders. Further analysis could lead to interesting research questions for scholars of populism and electoral politics, especially those approaching electoral contests from a game-theoretic standpoint. Specifically, what are the causes for the equilibrium number of leaders who repeatedly and successively alternate the CM’s chair among themselves over multiple assembly terms to be two and not more? What are the costs of jumping in the fray as a potential CM post contender when two such actors already exist, and at what point do the costs of such action outweigh the benefits for the third actor, as in the case of Kalyan Singh and T Panneerselvam?

I conclude by underscoring the need to cautiously receive data supplied by government sources for reasons related to inconsistencies in the recording and documentation of such data across different units— state governments in this case. This also, however, presents opportunities for researchers to develop criteria to rationalise such data across different units of analysis. Lastly, I hope that scholars of South Asia in general and those studying regional electoral politics in particular will draw on and benefit from the disaggregated data on Chief Ministerial terms to answers questions relating to (anti-) incumbency, CM churn and success in term completion- both for assemblies as well as Chief Ministers.

About the author: Prachi is a student of political science at the Australian National University and is currently working as a research intern at TCPD. Her research interests span criminal politics, public goods provision, ethnic conflict and international political economy.

Acknowledgements: I thank Prof. Priyamvada Trivedi for her detailed comments on the drafts and Srishti Gupta for proofreading. I also thank Neelesh Agrawal and Basim Nissa for their assistance and expertise in seeing this exercise through.