Historically, the politics of Punjab has been dominated by two parties – the Indian National Congress (INC) and the Shiromani Akali Dal (SAD). 18 unique parties have contested at least  four Punjab Vidhan Sabha elections (TCPD-PPI dataset), however the INC and SAD have almost always formed the Government. Of all the sixteen Chief Ministers to have ruled the state, fifteen have been from either of these two parties, with one being from a splinter group of the SAD. It is against this backdrop that the Aam Aadmi Party (AAP) entered the fray in the 2017 Vidhan Sabha Elections. Though they contested 112 seats and won 20, leading to a  strike rate of only 17.8%, a closer look suggests the AAP successfully split the SAD and BJP coalition vote share, and helped the INC achieve a significant victory. This article looks at data from TCPD’s political data collation tool LokDhaba to examine AAP’s entry into the Vidhan Sabha politics of Punjab.

We can see this more clearly by looking at Figure 2 below. It shows the seat share of Punjab’s dominant parties. The graph once again confirms that the INC and SAD are the two dominant parties, with their respective seat shares following an almost see-saw pattern, with one rising as the other falls. It can also be seen that the BJP competes primarily with the INC for seats, since when the BJP’s seat share rises, the INC’s falls further. This is in line with coalition politics, where the SAD and BJP have historically allied together in a pre-poll alliance and distributed seats amongst themselves in a bid to cut INC’s seats and not split their own vote base.

In 2017, the AAP achieved a seat share of around 17%, and the SAD suffered a precipitous decline from nearly 50% to close to 12%. This bolsters our claim that the entry of AAP cut into the vote share of primarily the SAD and to a lesser extent the BJP. This split the vote in favour of the INC, and allowed it to climb to commanding heights and claim a seat share of over 65%. 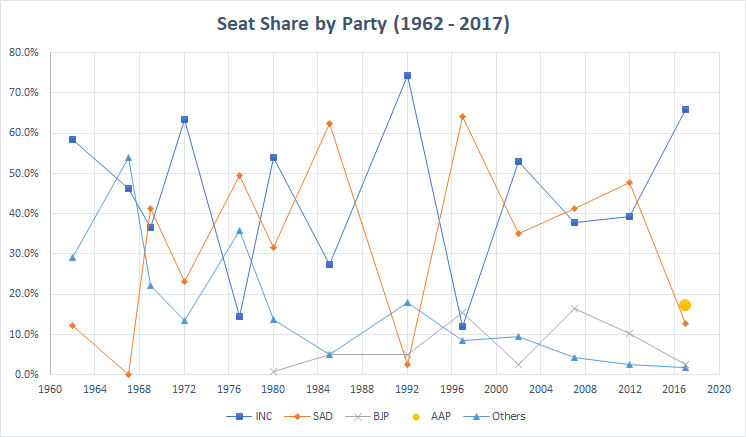 We further analyze AAP’s entry into the strongholds of the INC and SAD. Strongholds here are defined as a party having won a seat in a given constituency in at least four of the last seven assembly elections (1980-2012). We note that of the twenty seats AAP won in 2017, six winning constituencies were historic SAD strongholds (Bhadaur, Bholath, Budhladha, Dakha, Jagraon, Sunam) and three were historic INC strongholds (Kharar, Raikot, Talwandi Sabo).

Figures 3 and 4 below show similar information from a geographical perspective for the 2012 and 2017 Vidhan Sabha elections. Figure 3 shows which parties won which constituencies in the 2012 election, and Figure 4 shows the change in seats from 2012 to 2017. As visible, the seats that AAP won in 2017 were earlier SAD and INC seats in 2012.

Figure 4: Constituency wise change in winning parties for Punjab between 2012 and 2017 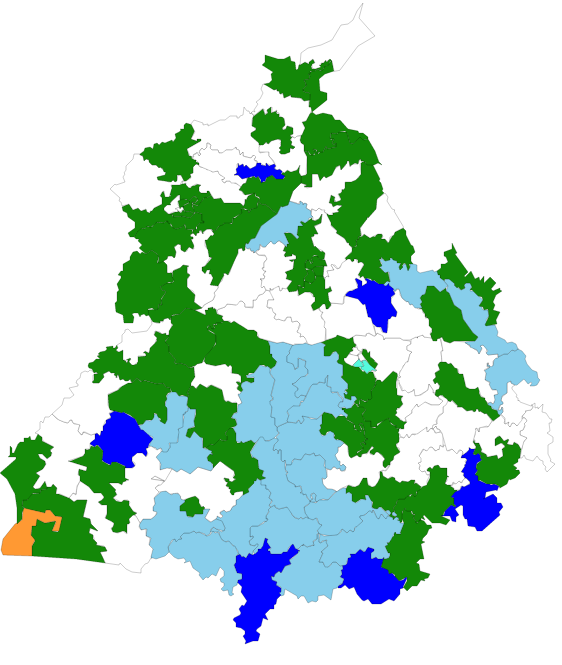 Despite AAP’s losses in 2017 in terms of absolute numbers — the party fielded a total of 112 candidates of which only 20 won, its wins are noteworthy when considered against the constituencies it captured. It successfully wrestled stronghold seats from the dominant parties of INC and SAD. It split the vote for the BJP+SAD alliance in favor of INC, allowing the latter to win by a massive mandate. 2022 will present an interesting playing field for the AAP with the intra-party turmoil evident in INC, the implications for BJP in the aftermath of the farmers’ protests, and the entry of a new party in the form of Cpt. Amarinder Singh’s Punjab Lok Congress.

Ishika Sharan is currently working at TCPD as a Research Associate. She graduated in Liberal Studies with a concentration in political science and media studies from Ashoka University.

Ananay Agarwal is currently working at TCPD as a Junior Research Fellow. He has a background in Economics, Mathematics, and Statistics.

Acknowledgements
We would like to express our gratitude to Professor Priyamvada Trivedi for her assistance in guiding us and editing this article. We would also like to thank the entire TCPD team for their continued efforts in compiling a comprehensive dataset on candidates contesting in Indian Elections.