At first glance, one would assume that women are well represented in Kerala politics. After all, the state regularly boasts of India’s best Human Development Indexes. Though some women have historically played an influential role in Kerala politics, they are still woefully underrepresented as a whole. In this article, we take a brief look at the history of Kerala politics, and then use TCPD data to help contextualise the debate.

The state started strong with regards to women representation. The first woman to join the Legislative Council of Travancore State was Mary Poonon Lukose in 1922. She was in fact one of 23 women that joined the assemblies of erstwhile Travancore and Cochin before the creation of Kerala in 1956. After the formation of Kerala, the first MLA to swear an oath was a woman, Rosamma Punnose. Accamma Cherian, popularly known as ‘Jhansi Rani of Travancore’, was imprisoned multiple times for her involvement in the Freedom Struggle. She was also chosen as the Acting President of the Travancore State Congress in 1942. A.V. Kuttimalu Amma was a prominent figure in the Civil Disobedience Movement, and as a result of her activities was also imprisoned multiple times.

During the 1960s and 1970s, Susheela Gopalan and K.R. Gowri rose to prominence in Kerala politics. Susheela Gopalan had served multiple times as MLA and held various portfolios throughout her political career, most notably the Minister of Industries and Social Welfare. She famously lost the Chief Ministership by just one vote to E.K Nayanar in 1996, when the CM post was being decided by an internal vote held within the party’s State Committee. Strangely, E.K. Nayanar had not even contested the 1996 election (he subsequently contested and won a by-election as per ECI mandate).

K.R. Gowri was the first revenue minister of Kerala, was the second longest-serving MLA in Kerala’s history, and was one of the founding leaders of the Communist movement in Kerala. She recently passed away in early May 2021 and was fondly remembered as one of Kerala’s most influential politicians.

More recently, another woman, K.K. Shailaja also emerged as a strong leader; as a party member, a successful legislator, and one of India’s most recognized State Health Ministers. In the 2021 election, she won her constituency with the largest margin scored by any candidate in the Kerala elections in 20 years. However, Shailaja ‘Teacher’ was excluded from the cabinet after the 2021 elections, despite her stellar performance both as a minister and as a candidate.

The political careers of the few above suggest that many unseen barriers exist for women to reach the very top of Kerala politics.

Profile of Women Politicians in Kerala

There are currently 11 women MLAs in Kerala, out of a total of 140, implying that less than 8% of the Assembly is composed of women. Women representation has never exceeded 10% in the assembly and has gone as low as less than 1% (in fact, just 1 woman MLA) in 1967 and 1977. The percentage of women candidates has been gradually increasing over the years, however, data shows that women representation in the Assembly has not kept pace. This goes to show that the low nomination of women candidates is only part of the story. Interestingly, women representation in the Assembly was higher in the earlier years, when there were fewer female candidates. This suggests that women might have historically been given ‘safe’ seats where they had a higher chance of winning. (Figure 1)

Figure 1: Percentage of Female Candidates and Winners in the Kerala Assembly 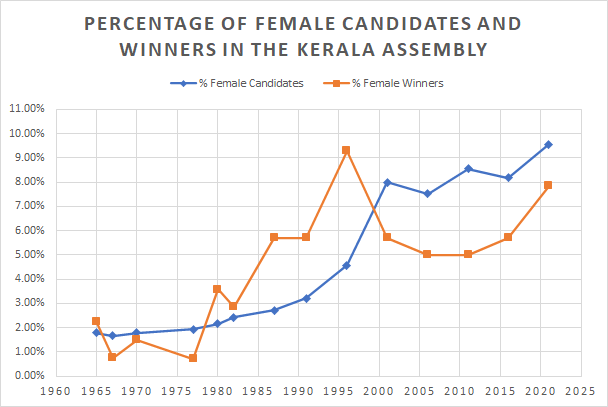 Furthermore, a closer examination of male and female candidates reflects the performance of women on social indicators. Women candidates on average have historically been much better educated than male candidates. More than one-third of all female candidates in the Kerala Assembly since 1965 have been at least 10th pass, and more than one fifth have been graduates or more. Comparatively, men have had much lower levels of education, with about one-sixth being at least 10th pass and just over one-twelfth having been graduates or more. This suggests that women tend to invest more in their education to try and overcome political barriers. (Figure 2)

Figure 2: Education Level of Candidates by Gender for All Parties since 1965

However, the above graph represents all parties including independent candidates, which can bias our results. Looking at only the major parties – BJP, CPI, CPM, INC, KEC(M), IUML- we see that the difference in education levels between genders is narrower, but women are still better educated.

Figure 3: Education Level of Candidates by Gender for Major Parties since 1965 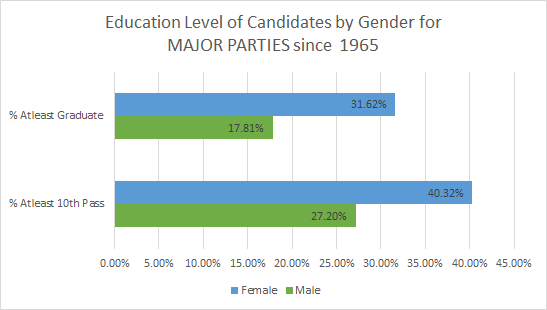 A High Social Status accompanied by a low Political Status

Data from the 2019-20 National Family Health Survey confirm a long-term trend of performance on various social and health indicators that are concerned with women. Over 99% of women in Kerala are literate and have good access to contraceptives and healthcare. The number of women who earned an undergraduate degree in Kerala in 2019 was almost twice as much as men who earned an undergraduate degree. The Neonatal Mortality Rate is at 2.6 /1000 births, which is less than one-tenth of Bihar. The sex ration at birth for children is 951 females for every 1000 males, one of the highest in the country.

While Kerala reserves 50% of its seats at the local level, both in cities and villages, women have not been allowed by male-dominated parties to move up the political ladder. The fact that women under-representation persists – and is indeed more serious – in a state where women have achieved wonders in almost every other field is, unfortunately, a testimony to the resilience of patriarchy in the party and electoral politics.
Considering the contrast between women’s social and political status in Kerala, it becomes clear that one should not put the onus of empowerment on the shoulders of women alone. Instead, one should focus on addressing the structural obstacles to women representation. Historically, only progressive legislation and court interventions have been effective at countering outdated yet powerful mindsets. The Kerala case is a good example to use for those who advocate passing the Women Reservation Bill in Parliament.

12All you need to know about the Draft Bill – https://www.indiatoday.in/education-today/gk-current-affairs/story/women-s-reservation-bill-all-you-need-to-know-about-the-bill-which-is-yet-to-be-passed-in-lok-sabha-1653451-2020-03-07