India and China: Problems that Persist

As part of our weekly Friday workshops, we had an hour-long conversation with Ms. Nirupama Menon Rao, the former Indian Foreign Secretary and the head of the Indian Foreign Service from 2009 to 2011.
Ms. Rao spoke to us about the history of the tensions between Indian and China and the nature of the recent conflict between the two countries at the Galwan Valley. A very insightful talk throwing clarity on an important geopolitical development in South Asia. 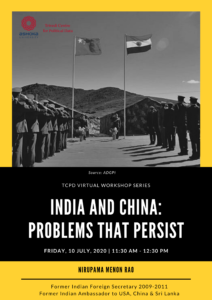