With the rise in COVID cases across India in January 2022 and the ECI’s curb on physical rallies, much of the election campaigning for the 2022 state assembly elections was diverted to social media. In this context, this article provides a summary of the different parties and their candidates’ presence on Facebook and Twitter for the state of Uttar Pradesh which can offer insights into their political strategy and the role of social media in political parties’ voter outreach programmes. The findings in this article are part of the Social Media and Elections Project, an ongoing project supported by the Trivedi Centre for Political Data.

Uttar Pradesh headed for polls between 10th February and 7th March 2022. With 80 seats out of the 543 in the Lok Sabha, 31 of the 245 seats in the Rajya Sabha, 403 seats in the State Assembly, and over 15 crore voters, the outcome of Uttar Pradesh’s elections is significant for the county’s politics.

Even though internet penetration in the state is one of the lowest in the country, it is observed that most political parties and their supporters have established a significant online presence on Facebook and Twitter to share and promote their parties’ agendas. The Social Media and Elections Project tabbed the presence of candidates from various parties which contested the 2022 elections while marking whether their account or the page was active and verified. Details of various informal pages such as satire pages made in support or opposition of a candidate or a party were also collected.

What’s in the numbers?

While consolidating the official Twitter accounts and Facebook pages of the candidates from these parties, we found that the Bharatiya Janata Party (BJP) and the Indian National Congress (INC) have the highest internet presence relative to the other parties contesting in Uttar Pradesh, with both parties having district-wise Facebook pages, many of which are active and verified. Despite being a state-level party, the Bahujan Samaj Party’s (BSP) online presence is minimal with just one state-level Facebook page and a few district-level pages. 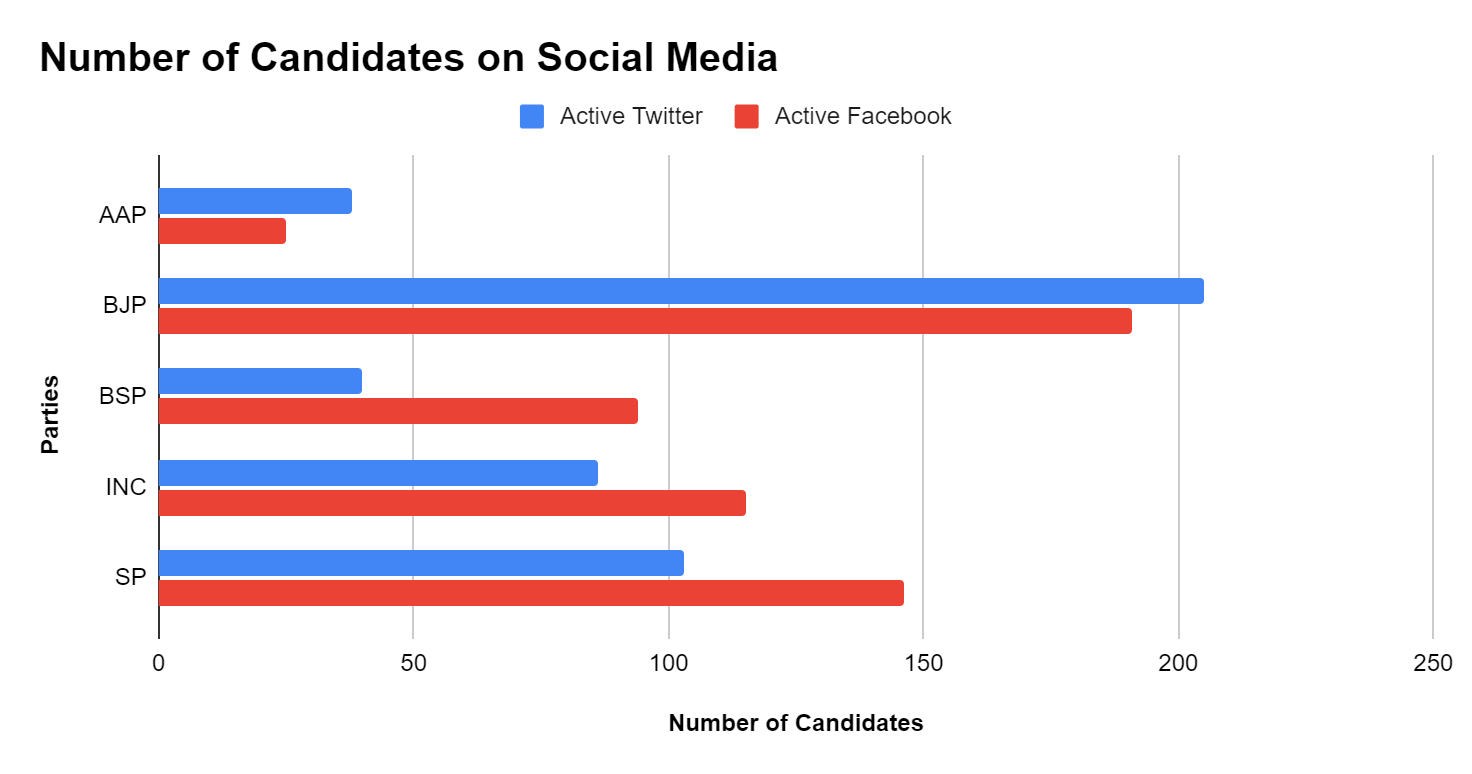 With Twitter being an increasingly used platform for sharing political opinions, looking at how many candidates from each party have verified accounts is key. We see that the BJP, with 132 or 35.1%  out of the 376 contesting candidates possessing verified Twitter accounts, leads in this domain. The other parties, including the INC, in contrast, have a dismal number of candidates with verified accounts: the INC has only 16 candidates with verified accounts, which is only 3.97% out of the 403 candidates that contested, and the SP has 13 accounts that are verified. It must be noted that none of the candidates announced by the BSP had a verified Twitter account. The same is the case for AAP as well, which can be attributed to the fact that the party has just made its entry into the state’s politics.

Figure 2: Twitter presence of key parties in 2022 UP Elections

Building upon the discussion on the district-wise pages of parties, the graph below gives us a visual representation of the Facebook pages created by each party at the district level. This is an important metric which can reveal the party’s active planning in having district-specific pages since the maintenance of candidate pages, which we looked at previously, is largely subject to the contestant’s office and personal capacity to mobilise social media presence.

On the lighter side of things

Moving on to informal pages which post content that is satirical or comical,  spanning the major parties, we came across 19 satire pages that support or oppose a particular party on Facebook. It must be noted that these pages, unlike the state-level or district-level pages, are not maintained by the political parties themselves but by party supporters. The BJP has about 14 Facebook pages in its support, the SP and AAP both have 2 pages in their support and the BSP and INC both have one page each in their support.

Figure 4: Satire Pages made in support of different Parties

By analysing the digital presence of candidates of the key political parties in the 2022 Uttar Pradesh State Assembly elections, we gather that the Bharatiya Janata Party (BJP) and Indian National Congress (INC) have a significant presence on Facebook and Twitter in comparison to the other major parties in the state like the Samajwadi Party (SP) and the Bahujan Samaj Party (BSP). With Twitter being an important platform for political discussion, the data reveals that out of all the parties which contested the 2022 Uttar Pradesh elections, the BJP has the highest number of candidates with both active and verified Twitter accounts and also the most number of candidates with active Facebook pages, making it the party with the largest presence on social media. Though the Indian National Congress has set up district-specific pages for all regions in Uttar Pradesh, the number of pages alone cannot offer insights into efficiency in voter outreach and this must be analysed in terms of content engagement by the audience. But it nevertheless indicates that the party, by ensuring the creation of district-level pages for all districts in Uttar Pradesh, has taken cognisance of the importance of social media in party communication.

The BSP, however, has the least presence on all social media platforms, be it in terms of creating district-wise pages, or its candidates’ presence on Twitter and Facebook, indicating that it has a long way to go to adapt to newer forms of voter interaction. The Aam Admi Party, which has just made its foray into Uttar Pradesh’s politics has shown initiative in creating a good social media presence, comparable to the Samajwadi Party’s numbers––a party with a historically long presence in the state’s politics––in terms of developing a district-specific social media presence. Additionally, the memes posted and shared by particular parties offer glimpses into their respective ideologies and affiliations. Social media, then, can be viewed as an important tool for politics in India, and how parties will strategise and evolve in response to the increasing proliferation of digital media across demographics will be key to the effectiveness of their communication and connection with voters.

Rishika Rai has completed her Post Graduation in Development Studies from the Indian Institute of Technology, Guwahati and is currently working at TCPD as a Research Intern

I would like to thank Professor Priyamvada Trivedi, Aishwarya Sunaad and Neelesh Agrawal for their feedback and support throughout the editing and the publishing process.